FREE SHIPPING ON ORDERS OVER $85

From Bandai, the creators of the smash hit Dragon Ball Super Card Game, and the renowned American game designer Ryan Miller, comes a new expandable card game series! Utilizing the universal Chrono Clash system, the universes and characters used will draw in players of card games, board games and each respective universe's fans alike. This will enable the creation of a player community much larger than any traditional card game! The Chrono Clash System is covering new ground after the Naruto Boruto Card Game, and will feature the world of the earth-shaking giant monster Godzilla!

The Godzilla Card Game will have artwork like never before! The 3D art gives the cards greater realism and helps draw out the devastating Godzilla world.

Note: Customers who order the first printing of the game are eligible toreceive 2 free Tournament Packs - while supplies last.

Godzilla Card Game is a compilation featuring Godzilla!
Choose your favorite monsters to build a deck or play to win with a powerful, custom deck!
For fans of Godzilla and fans of card games and board games alike, this is a card game that everyone will enjoy!

Whenever this battler is tapped to activate their tap ability, gain 1 time.

This battler has toughness and elusive. You can choose to activate toughness when you summon a battler by putting a card face up underneath the battler with toughness. Your opponent must have an elusive battler attack this battler, and whenever it would be destroyed, you can discard a card from under it instead. If there are no cards remaining under this battler, it will be destroyed. 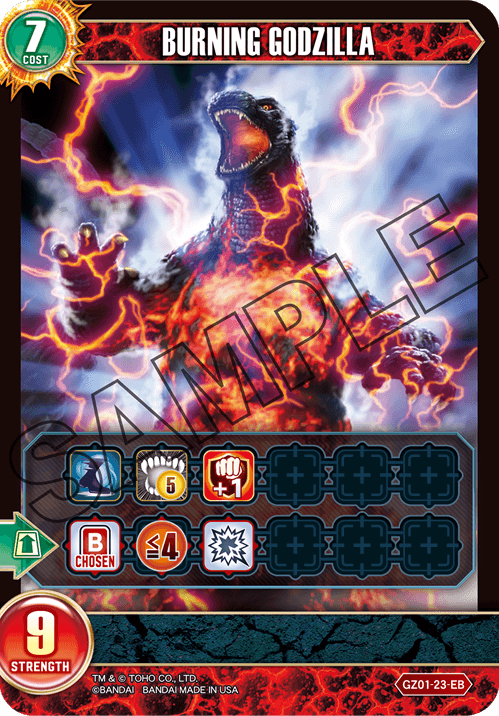 There are two ways to summon Burning Godzilla. As an Extra Deck Battler, Burning Godzilla can be summoned by destroying standard battlers in play that have a total cost of 7 or more. This enables the player to choose to use his Fast ability.
Burning Godzilla can also be summoned by paying 5 on the Chrono Clash gauge. If you summon him this way, he will immediately attack, even if the Chrono Clash Gauge is now on your opponent’s side! He will be destroyed after the sneak attack summon.
Regardless of how you choose to summon Burning Godzilla, he has a +1 Guardian Attack and destroys a battler of your choice with strength four or less when summoned.

There are 2 ways to win with Chrono Clash System.

1: Whenever a player is attacked while they have no guardians, they are eliminated from the game. The last player standing wins the game!
2: If you ever have 5 or more completed quests, you win!

The path you take to victory is up to you! Experience the heat of battle in a game with 2 different victory conditions!

Chrono Clash System is a combative card game.
Play head-to-head or with up to 4 players.

You have no items in your cart